This new Marriott hotel near SYD airport is currently due to be opened in June 2023 (opening date may change). The Moxy Sydney Airport offers a total of 301 guest accommodations over 12 floors and include a complimentary breakfast during your stay. The property features an in-house restaurant & bar, a cafe, a fitness centre, free Wi-Fi, 6 meeting rooms, EV charging stations (fees apply) and on-site parking (fees apply). Read more... 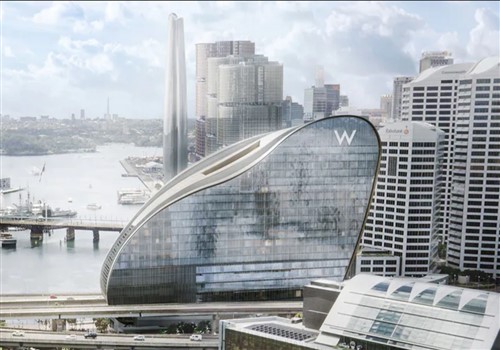 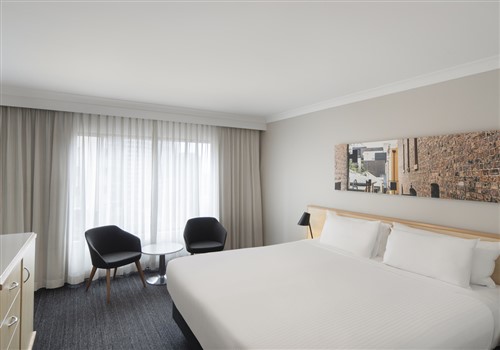 The Mercure Sydney Martin Place is a recently opened new hotel in Sydney offering a good location in the heart of the CBD. Read more... 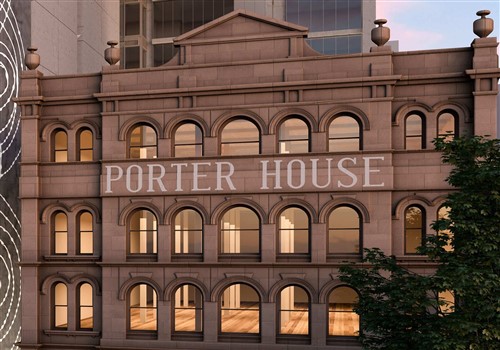 This new upscale hotel in the Central Business District of Sydney was recently opened in September 2022. The Porter House Hotel is housed in the historic Porter House building and offers 122 upmarket accommodations, three dining venues, an outdoor pool and a gym. Read more... 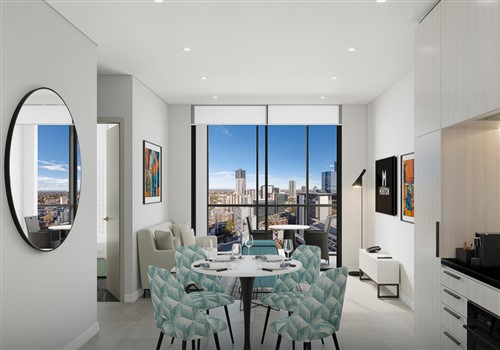 Meriton Suites George Street is a new apartment hotel in Parramatta that was opened in November 2022. The brand new property offers spacious accommodation in 1 to 4 bedroom suites. Read more... 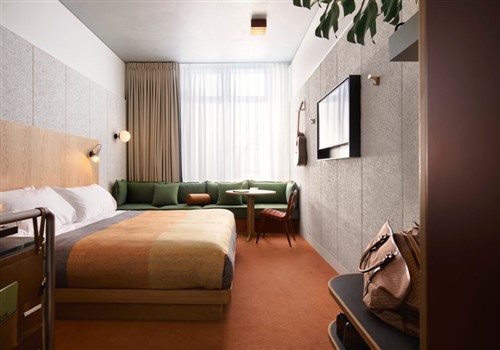 This new boutique hotel in the Surry Hills (an inner-city suburb of Sydney next to the CDB) is housed in the historic Tyne Building along Wentworth Avenue. The Ace Hotel was recently opened in June 2022.  Read more... 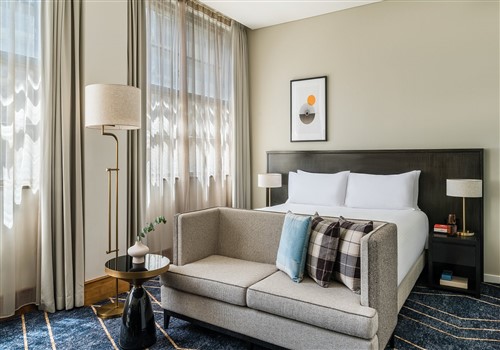 A new Kimpton hotel in Sydney was recently opened by IHG on the 14th in February 2022. This new upmarket hotel is housed in the building that was formerly the home of the Primus Hotel Sydney, located in the heart of the city on Pitt Street. Kimpton Margot offers a total of 172 stylish Art Deco inspired guest rooms and suites, and features the Luke's Kitchen and Cellar by Luke restaurants, a 1930s-style cocktail bar, a rooftop pool, a fitness centre, and a business centre. Read more... 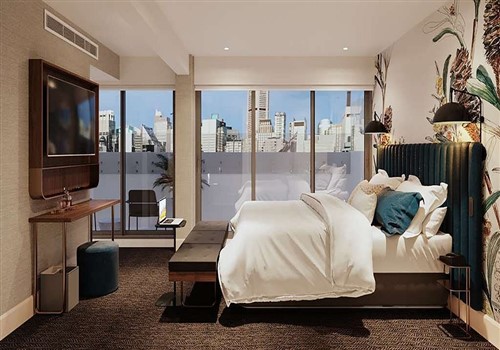 Best Western have recently opened this new hotel in the Darling Harbour area of Sydney. The Aiden by Best Western is their first Aiden branded property in Australasia offering a total of 88 stylish guest accommodations and featuring the Wayfarer’s Bar & Café. Read more...

This new hotel in Sydney is located in Bondi Junction (less than 2 miles away from Bondi Beach) and offers 82 modern guest rooms that come with a kitchenette. The Holiday Inn is housed in a 7-storey building that used to be the home of the Quest Bondi Junction. IHG have now taken over the property and re-branded and updated the guest rooms and common areas. Read more...

A by Adina Sydney is a new apartment hotel in Sydney close to the iconic Australia Square, located on the corner of George Street and Hunter Street (only a few minutes walk away from The Rocks and Circular Quay) and a short stroll away from the Sydney Lightrail. Accommodation is available in either studio rooms, executive rooms or one and two bedroom apartments, and the property features an on-site restaurant, gym and pool. 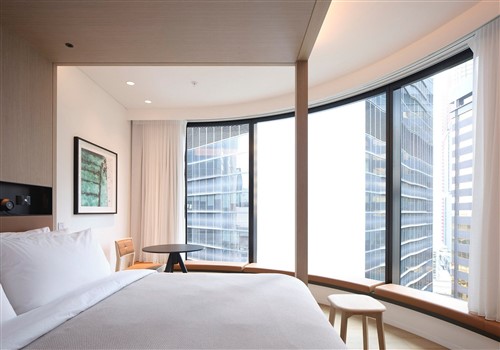 Little National Hotel is a new luxury hotel in central Sydney in a prime location along Clarence Street close to Wynyard Train Station and the many attractions of downtown Sydney and the CBD. The hotel offers a total of 230 guest rooms over 12-storeys and the property features a rooftop lounge, The Terrace Bar and a fitness centre.

The Blue Hotel Bondi opened in 2020 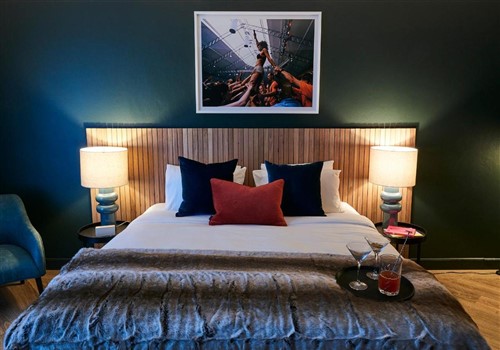 The Blue Hotel Bondi is a newly opened trendy hotel in the centre of Bondi Beach surrounded by bars, restaurants and cafes. This new boutique hotel offers a total of 33 guest accommodations in suites (including 6 bunk bed suites that sleep up to six people) and penthouses. The hotel features an on-site restaurant, cafe and a co-working space. 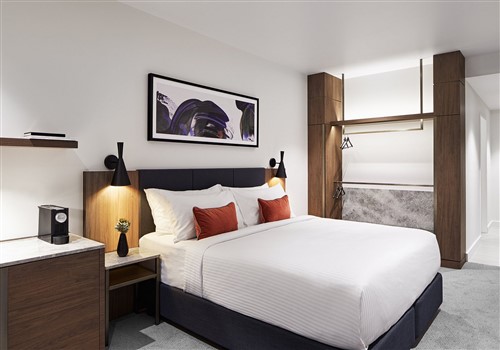 A newly built hotel in the CBD of Sydney, the Crowne Plaza Sydney Darling Harbour was opened by IHG in October 2020 and offers a good location on the corner of Sussex Street and Bathurst Street. This upscale hotel offers 152 rooms or suites and features a rooftop outdoor heated swimming pool and sun deck, two restaurants and bars and a café, meeting rooms and a business centre, and a 24-hour gym. 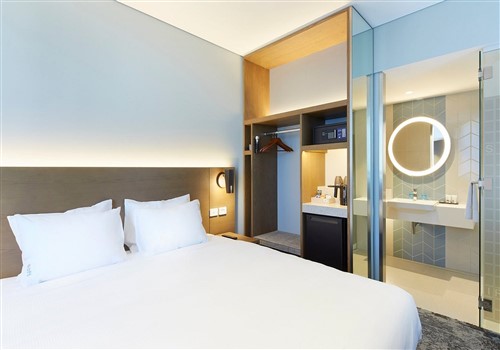 This brand-new hotel at Sydney Airport opened by IHG is located close to Sydney's Domestic Terminals and just a few minutes drive away from Sydney International Terminal. The Holiday Inn Express offers a total of 247 guest rooms and features complimentary breakfast at the hotels' on-site restaurant, a bar, a business centre, free hi-speed Wifi and a gym.

The Fullerton Hotel opened in 2019 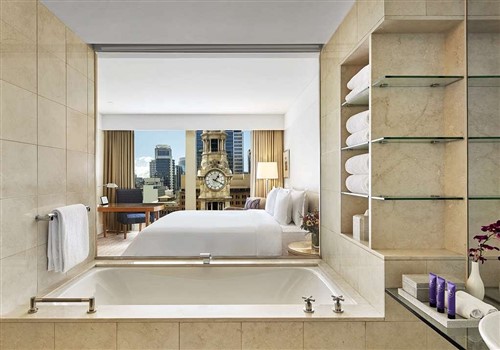 The Fullerton Hotel Sydney is a new luxury 5 Star hotel housed in the former General Post Office building in the heart of the city. The hotel offers accommodation in a range of guest rooms and suites in either the high-rise section of the building where you will find the more modern rooms, or you can choose to stay in the old heritage part of the building where the rooms are more classically inspired. The Fullerton features an on-site restaurant, a bar, two ballrooms, meeting rooms and a fitness centre. 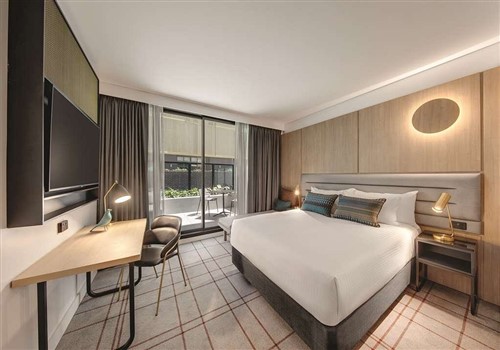 The Vibe Hotel Sydney Darling Harbour is a new 4 Star hotel in the CBD located along Sussex Street, opened in October 2019. The property offers a range of guest rooms and executive suites and features two on-site restaurants, a rooftop bar, a rooftop infinity swimming pool and a gym. 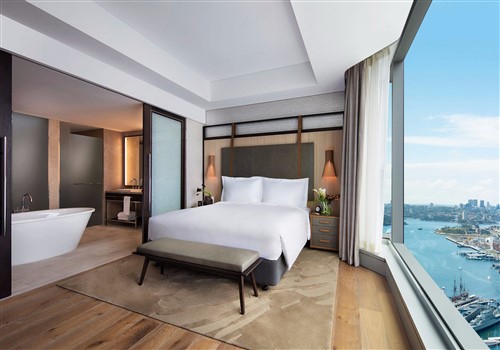 The Sofitel Sydney Darling Harbour is a new luxury urban resort in the heart of Darling Harbour located just across the street from the International Convention Centre. The hotel offers a total of 590 spacious guest rooms and suites and features an outdoor infinity pool, a gym with fine views of the city skyline, four restaurants and bars and an Executive Lounge. 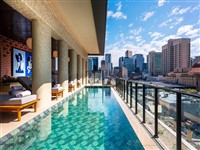 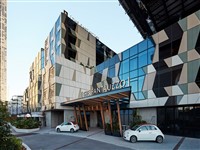 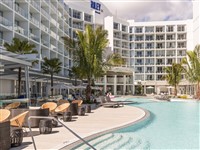 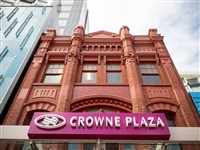 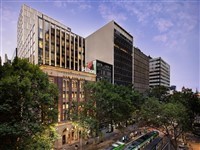 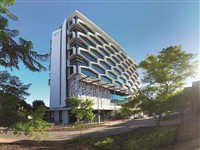